After much deliberation, I found the payback period for PV (electrical production) installations was NOT within my comfort zone, both financially, and feasibility, BUT, the capture of the sun's energy for hot water production was short and sweet, and led me into a bit of a quandary as to whom I should ask about these systems, and where to get the advice and pricing needed to get going on my project!

I wanted top performing equipment, reasonably priced and someone who has been around for a while, and not some fly by night operation, when I stumbled upon a company based in Calgary, Alberta, owned by a man named Stefan, that had what I wanted, at the prices that were right for me, and the advice I needed, when I needed it!

I must be candid, I wanted this to be a do-it-myself project, and as I prepared the list of components necessary, I continued to look around for the proper solar collectors for my project and my search always led me back to Latitude51 Solar, and the decision was made.

Two 30 tube collectors have provided our business location with in excess of 38% of our domestic hot water production and almost 6% of our space heating requirements, which was a little less than I had hoped for at first, until I realized that the savings were ABSOLUTELY "found money", and that we had just endured a terribly unending winter season and that my "payback period" was actually shorter than I had anticipated and within another year and a half the system components are PAID FOR, in full, after just over a year of operation.

The BEST way for me, to shorten it further, would be to actually purchase another 30 tube array, and add it to my system, to increase our production of hot water capacity over the winter season,and in the summer months (IF we actually ever have them this year), I can just "cover up" one or two arrays, to DECREASE the production of hot water (still more than required) during the summer! 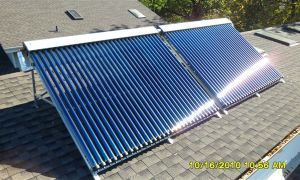 We have hot water heating,and I NEEDED the flexibility of heat production when I NEEDED IT, and Latitude51 Solar has given me what I needed ,along with the advice and suppor to make it all happen!
Call or contact Stefan Varga at Latitude51 Solar, and you WILL find what I found out, about heating water with solar energy!

As a side note, it was kind of funny.....my gas utility thought it "prudent" to change our outdoor gas meter, even though the last one was only 4 years old, and had the technician a little puzzled!!...He was sent to replace a "defective" gas meter at our business location, because of our lower than anticipated gas usage chart graph, and that the usage "should" have been much higher with the severity of our winter this past year!!

He said "I don't know why I'm changing this meter, there is nothing wrong with it"!! 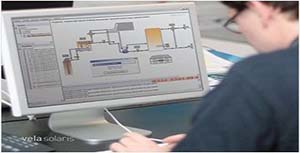