This article describes a home built by someone in Big Bar Lake in BC. Approx. 200 kms NW from Kamloops. The homeowner planned right from the start to try and heat the house with solar water Heating.

When trying to incorporate any renewable energy project into a building, it makes more sense to make sure the home is as well insulated and efficient as possible in the first place as this will minimize the non-renewable energy you need to replace. This article describes the system and the house to help other people who are wanting to install solar water heating in the home. Remember that this system will also apply to commercial buildings as well.

The article is a follow on from a previous article on solar hot water storage tanks describing cost effective large solar tanks that can be used in these projects.

After you read the article on the solar water storage tanks, you will now know why you need large tanks for solar hot water systems so back to the story of the house. 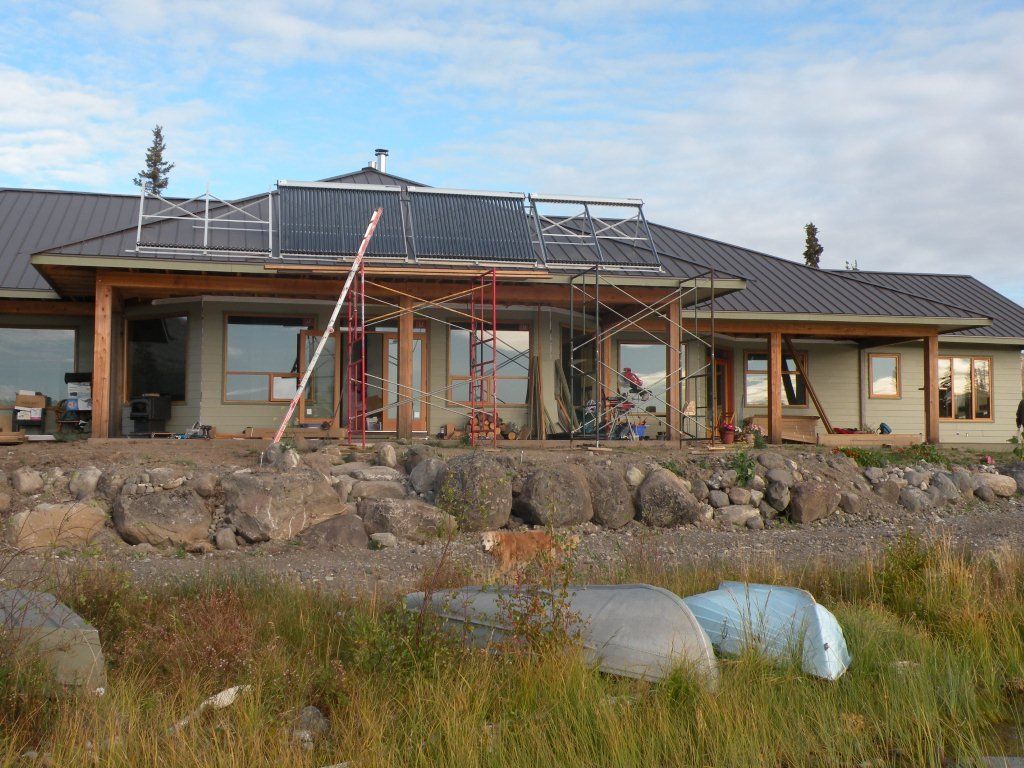 During the building plans the homeowner had a 1700 Gallon (yes 1700) water tank installed in the insulated basement while the foundations were built.
The tank was bought from Barr Plastics in Abbotsford BC. The tank cost about $1500.  We have been told shipping a similar tank to Alberta would be less than $200. 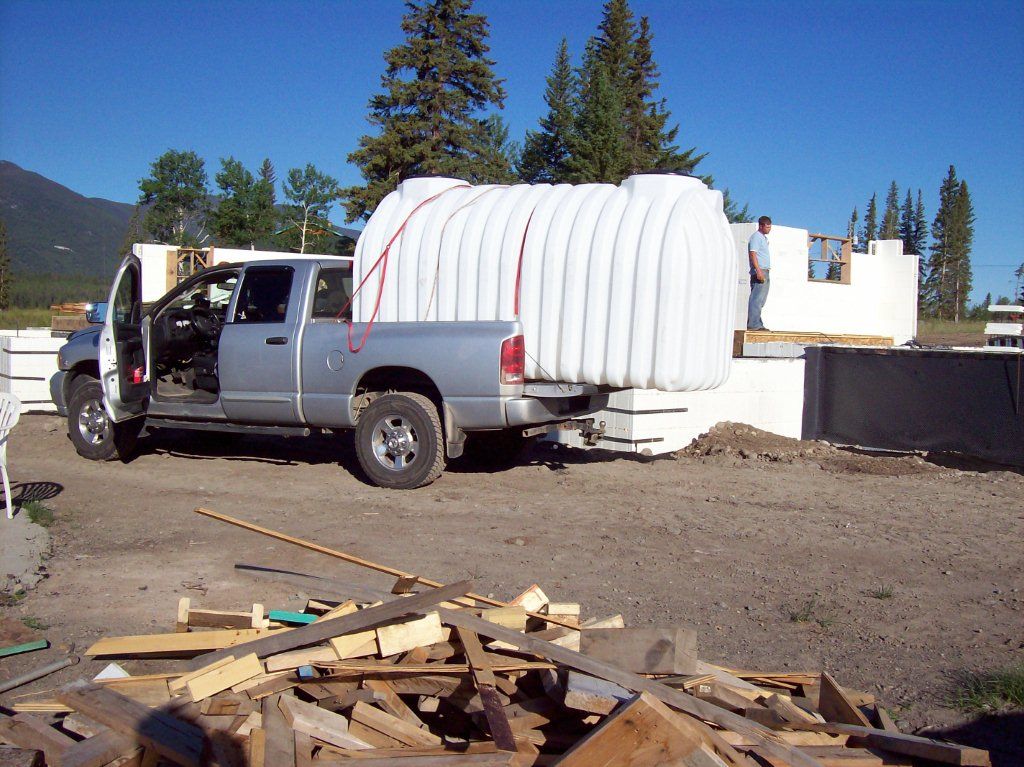 The home was then built around the tank. If you are thinking of building a home and want to include a solar water heating system you need to plan to put a large tank in during the build. It is normally not possible to install a tank this size once the house has been framed. You might not need a tank this large but don't forget to plan ahead. 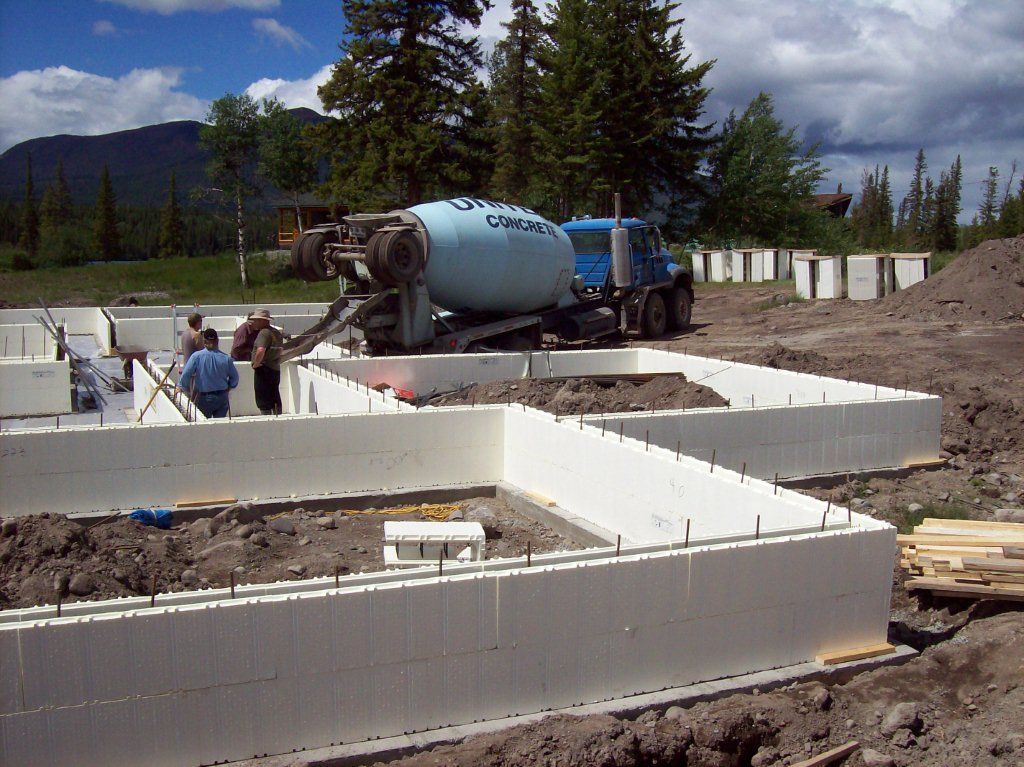 This view (above) is with the foundation for the guest suite in foreground, to be backfilled for slab on grade, the two closest men are standing in the area designated for the storage tank and to their right is garage #1 to be backfilled.

The tank is in an insulated concrete room in the basement. The tank room is more or less central to the house and below the main floor mechanical room where the smaller 60 gallon water tank and all the hydronic manifolds were located.

You can see the entrance to the tank in the floor of the mechanical room in this photo. 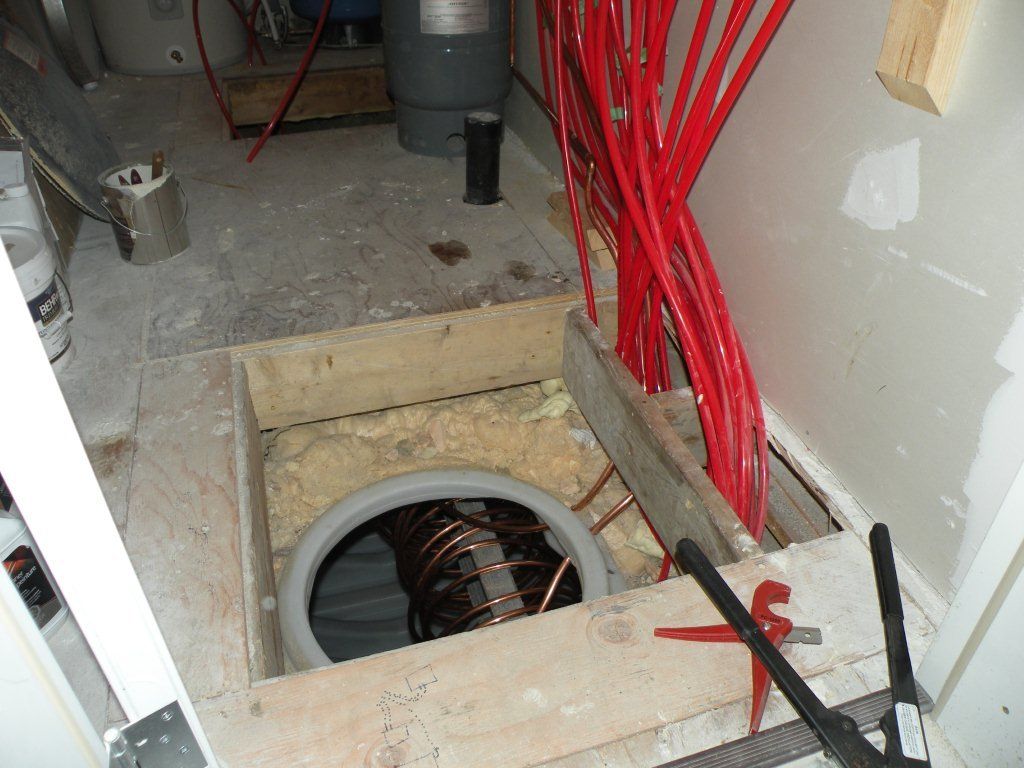 The owner then filled the gap around with the 1700 gallon tank with all the spare bits of insulation that were left over from the house build (no disposal costs), then spray foamed over the top.

Energy Stored in the Tank.
Four x 30 tube evacuated tube collectors (120 tubes) were installed on the roof, ever only 90 tubes were initially installed and connected up ready to flow 1st November 2010. These 90 tubes heated 1700 gallons of water up to 72 Deg F (22.2 Deg C) by the end of December.

Remember this system only had 2 months of cloudy, cold weather in BC to heat the tank.  November and December are 2 of the 3 worst months to collect solar energy. When the additional tubes are added and given the summer to heat the tank, this tank will be storing a huge amount of heat.

Solar Heat Exchanger Coils.
Into the 1700 gallon tank were 3 coils of copper. As the tank was not specifically designed to be a solar tank the owner had to think of a way to suspend the heat exchanger coils in the tank. He had an old Aluminium ladder which he pushed through the man hole cover of the tank and hung it in the tank. The Heat exchanger coils (copper coils) were suspended from the ladder in the tank.

You can see in the picture below the first coil attached to the ladder inside the tank. 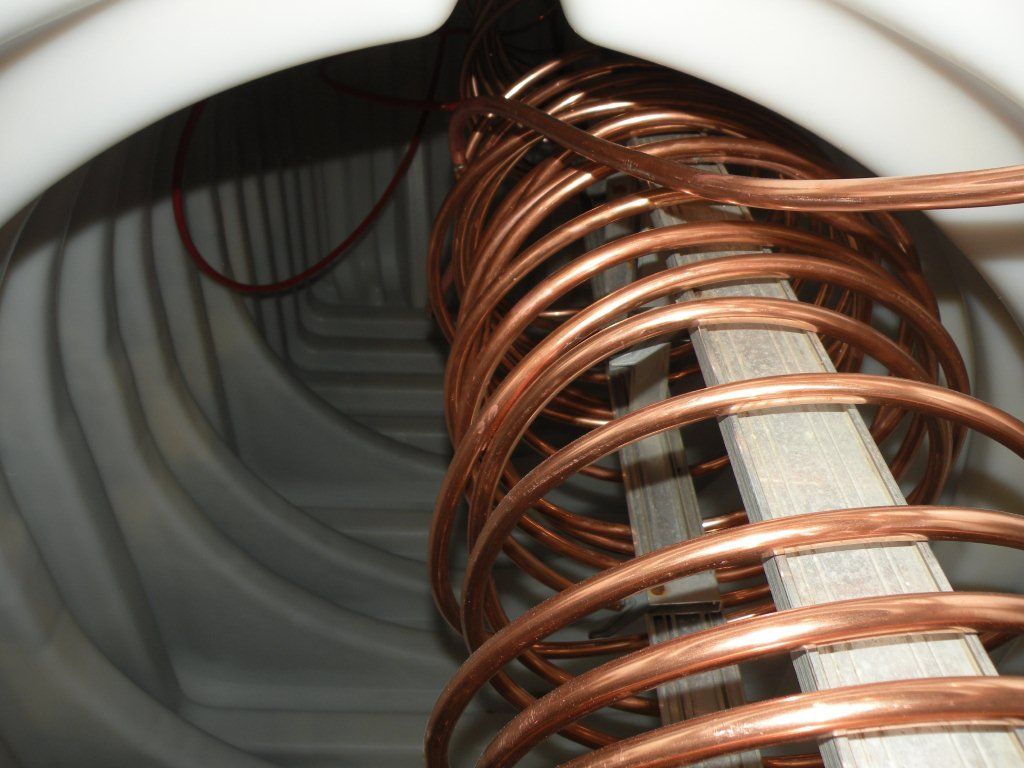 The tank had the following solar heat exchanger coils installed

During Nov and Dec 2011, the coldest temperature outside was -25 Deg C (- 13 Deg F) and the collector was still covered in frost, but the collector quickly heated up to 100 Deg F when the solar pump turns on.

As the tank heats up, the Solarbloc decides to turn itself on as soon as the collector temperature exceeds the tank temperature and can heat the tank. With the variable speed pump in the solar pump station, the flow rate is adjusted to ensure the optimum temperature of the glycol to maximize the transfer of heat into the large solar tank. 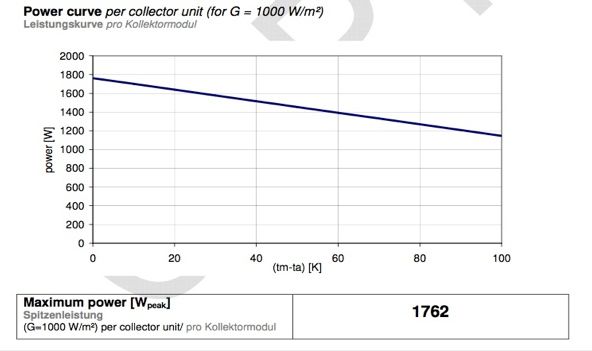 In the above graph, the line slopes down to the right. All solar collectors power curve slope the same way.  All this means is that when heating water, the colder the water it is heating, generally the more efficient the collector is.

The X axis shows the temperature differential, i.e. the differential between the collector temperature and the water it is heating. On the left side the maximum efficiency is at the X axis = 0  The Power (W) is 1762. On the right side, at X = 100, the power output drops to about 1180.

A simplistic explanation of what this means in practice is that with a very large solar tank when the tank is 50 degrees F, in the morning as soon as the sun is coming up,  as soon as they are about 60 degrees F they will be heating the tank. The solar pump stations are generally set to turn on the pump when the collectors are 10 degrees hotter than the tank.

The temperature differential in this case is only 10 degrees so they are working very efficiently.

Compare this to what happens when you are heating a small tank. As the small tank heats up quickly the collectors can only heat it when they are hotter than the tank. In summer a 40 or 60 gallon tank can be very hot 60 to 80 deg C (140 Deg F or 176 Deg F) by midday.  This means as soon as the tank reaches its maximum temperature, the closed loop solar system must start to "dump" any excess heat. Then during the afternoon the solar collectors and you are wasting heat that could be collected and stored even though they will still be very hot. As they start cooling down through the afternoon and evening the small tank will still be very hot so no solar heating of the tank can occur.

As we descried in this article "Heating Homes with Solar" unless you have a endless budget, or you live in Hawaii, do not even think of trying to heat a building with flat plate solar collectors. Evacuated tube collectors can produce 1100% more heat in cold cloudy conditions than a flat plate collector will.

In this home the owner purchased 4 x 30 tube collectors. However at the time of writing only 3 of the collectors (90 tubes) had been installed and the pipework had not yet been fully insulated.

In floor Heating - the only way to really heat your building.

As we have discussed in Heating Homes with Solar, the only really efficient way of heating a home is with in floor heating. You run warm water through the floor (say at 20 deg C). This means the floor you walk on is warm, warm air rises past your head and makes you feel warmer with lower temperature water. 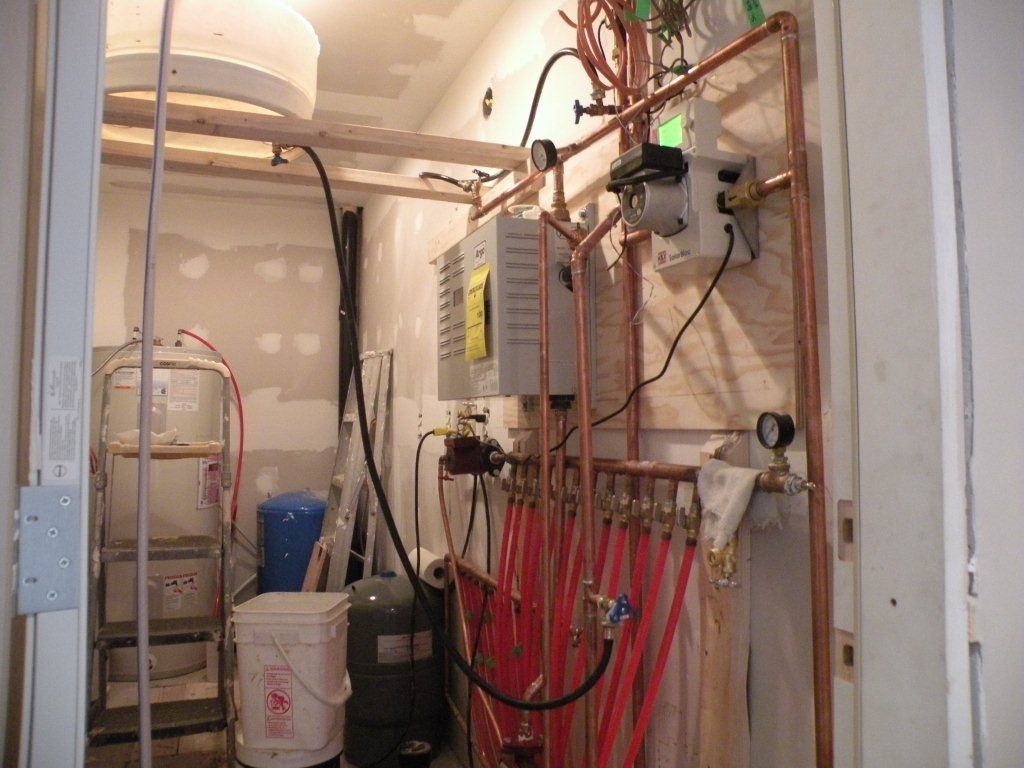 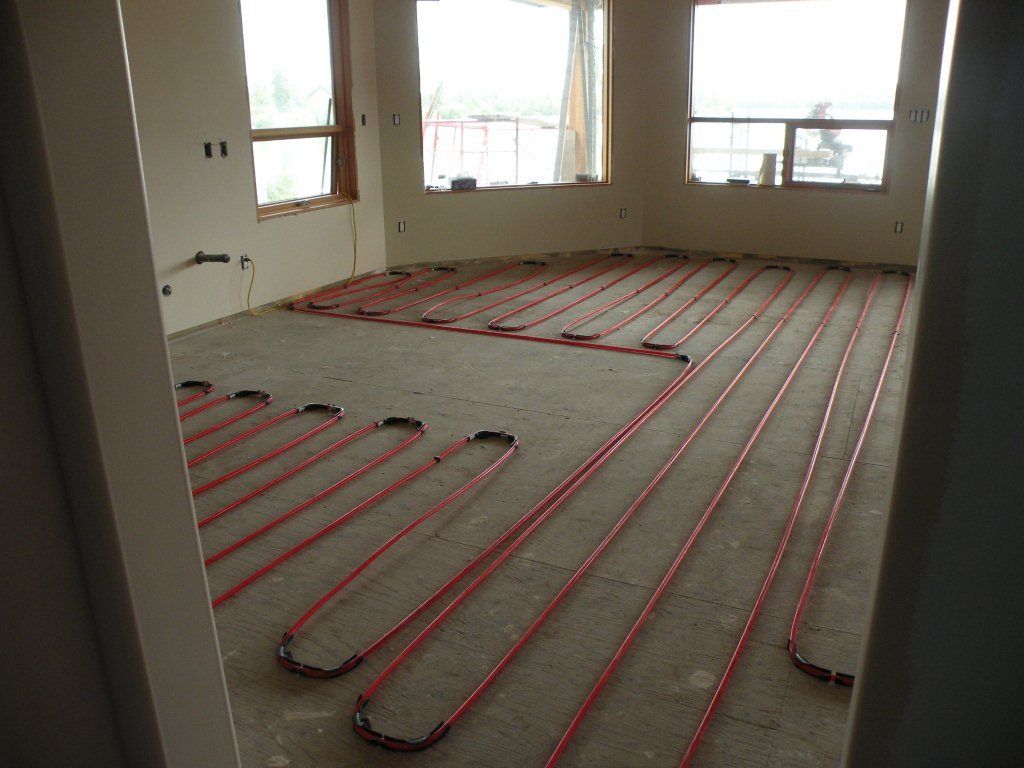 The owner installed a back up electric heater to boost the heating temperature if the home was too cold. At the time of writing the owner said this back up heater had not yet been needed (during Nov to Mid Jan 2012)

In this case, the floor loop fluid is pumped first through the heat exchanger coil in the 1700 gallon tank. This to try and make sure that the fluid comes out of the tank already heated to the tank temperature. The large volume of heat in the large volume of water means that the floor loop fluid will more or less be at the temperature the 1700 gallon solar tank is.

The system was only connected live on the 1st November 201, and by the end of December the temperature of about 1700 gallons of water had been raised from 35 Deg F to about 73 Deg F by the solar system. The owner reported that when the tank was at about 73 Deg F, over night the tank would drop about 1.5 degrees while heating the house. The next day the tank gets temperature boost once the solar kicks in again.

In practice this could be fed through an inline water heater to boost the floor loop fluid to 20 degrees (or whatever the temperature you want the house to be at) if the solar preheat tank is not hot enough.

In this case though, there isn't an inline heater in the system so the fluid temp in the floor will fluctuate depending on the temperature of the solar tank. The tank temperature will fluctuate, up due to more sun, or down due to heat loss during the night.

The owner reported that the main house (approx. 2500 ft2) was being heated by the in floor heating and not the garages and decks, however the back up electric heater had not yet kicked in to boost the in floor heating in the home, this was in spite of outside temperatures dropping to - 25 Deg C.

Last time I spoke to the owner, the weather had been particularly cold and had been very cloudy for approximately 7 days so the tank had dropped from about 73 degrees to 55 degrees F over about 7 days which was getting too low to really heat the house, however this shows the importance of having the large tank, the tank acts as a store of heat.

This is quite an achievement. Only 90 tubes have been installed so far which is a very small number of collectors. We would normally recommend many more than 3 collectors for heating a home of this size.

How many BTUs does the solar system produce?

Remember that this system is only partially installed and isn't not yet fully insulated so there will be more heat loss than there will be when it is fully complete.

This photo below was taken by the owner and sent along with this comment...." even in the snow or frost the uncovered areas of the collectors gather heat, from the sides, until the snow or frost slides off...…after several days of overcast and snow  at –10 deg. the tank was 55 deg., at 8.45 this morning the pump turned on and at 4.30 the tank was at 60 deg. I still haven’t installed 30 tubes and I haven’t completed insulating the piping to the collectors." 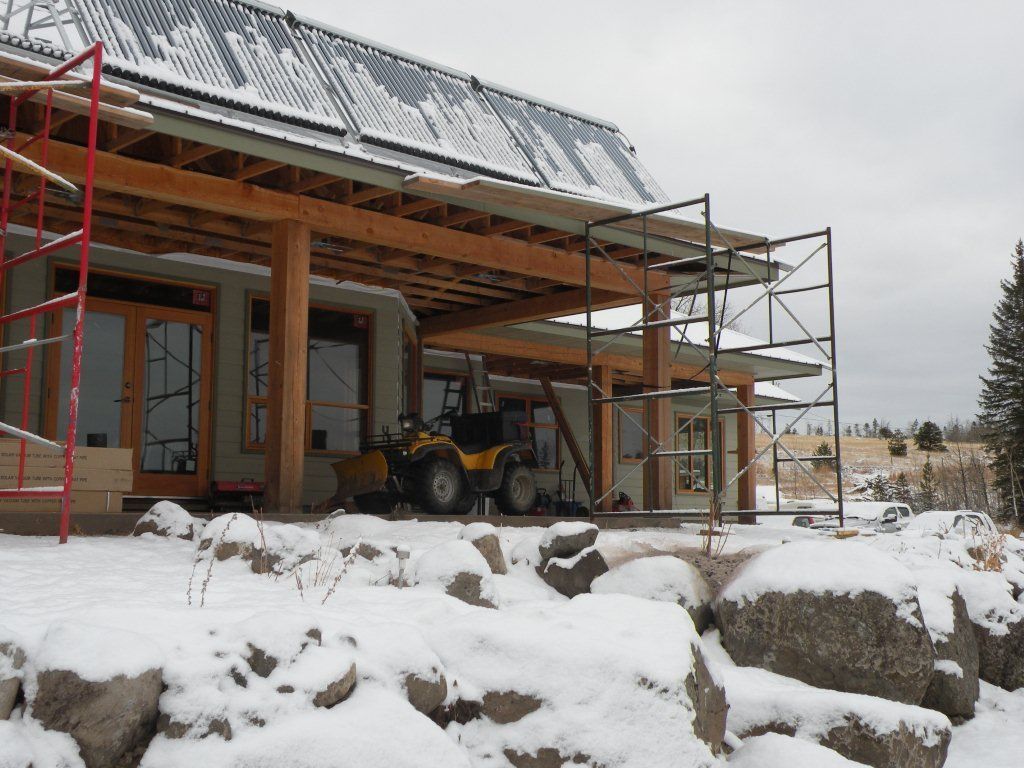 There are many "rules of thumb" for solar heating. We have often seen estimates (and used them ourselves) of approx. 30 tubes for every 100 ft2 of home. This number however covers a wide range of "average" homes including forced air heating which is very inefficient and can vary up or down a lot.

There are many factors which we described in this article here. "Heating homes with solar"

The exciting thing about this example is to show that even a small number of evacuated tubes can help heat a home so long as you design and build the house with energy conservation in mind from the beginning.