Solar hot water heating can be found in every county around the globe. Asia leads in the number of solar water heaters for domestic use, but Europe is a close second. In fact, countries such as Germany and Israel have been using solar hot water for decades. In fact solar water heating in German is so popular that all new builds both residential and commercial require a solar heating to be incorporated into the heating design.

In North America Hawaii leads in domestic solar water heating because of both the incentives and cost of electricity and California with its aggressive green energy plan is a close second. Canada despite having twice the solar energy as Germany, is far down the list in most part due to lack of a clearly defined green energy plan. However, with the success of the Ontario FIT program, Canada may soon see a change in its green energy plan.

Solar water heating is the easiest and most affordable means of going green. Compared to Solar PV, an average household can retrofit their existing water heater to solar water heater for under $3500. A complete solar home heating system can be installed for a few dollars more.

How does it Work?

A solar water heater in Northern Climates requires some form of protection against freezing. This can be done by means of a drain back where by the water is drained back into the house during the night to avoid freezing or it can be done via an active closed loop with a heat exchanger to transfer a polypropylene heating fluid that to the potable hot water. In cold Northern Climates we choose the later as polypropylene can handle temperature below -40 without freezing this guarantees that the system will not be damaged even if a malfunction occurs.

There are four main components of a solar water heater.

The heat exchanger in a solar water heater can either be inside a specially designed storage tank or can be placed externally outside the tank. Both styles work well but the internal heat exchanger has the advantage of zero heat loss. 100% of the heat energy is transferred to the potable water versus an external heat exchanger that can lose a small amount of heat to the external surrounding air. 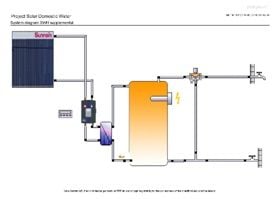 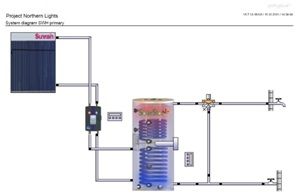 A pre-heat design uses a two-tank system. The primary tank is the homeowners existing hot water tank. This can be gas, electric or even on-demand. A second tank is placed before the primary tank and is heated 100% by solar energy. The water from this tank is then drawn into the primary tank when a hot water tap is opened. In this way the solar "pre-heats" the water coming into the main tank resulting in less energy being needed to heat the domestic hot water.

A supplemental solar heating system uses a single tank configuration. In this system the top portion of the tank contains an electric heating element. Solar heats the bottom portion of the tank and as the hot water rises to the top the backup element may supplement the heat energy if not enough solar energy is present of the demand is too great. A supplemental solar heater can use a standard electric water tank with the bottom element's power disconnected (electric heaters have both top and bottom heating element). The main advantage of a supplemental system is that it only requires on tank which is great for homes limited in space or new home construction.